The Festus wrestling team dealt with a lot of emotions during “Senior Night” Tuesday at home.  Not only were they honoring the seniors for their dedication to the program, they were also having to deal with the competitors that were before them.  The two matches against Potosi and St. Clair provided a mix of emotions as the team handily defeated Potosi 51-25, but lost to a very strong St. Clair squad, 45-34.

Things did not go quite as smoothly against the St. Clair Bulldogs.  Rector, Decker, and Jacob Cortez (10) earned points from forfeits.  The Tigers got big points from Allison who won his 170 weight class match by fall at the 1:23 mark, and Boyer who won at 285 by fall which took only 38 seconds.  However, Festus just couldn’t overcome the five Bulldogs’ victories by fall, a decision victory, and one forfeit victory as they fell 45-34.

A few Tigers fared well in exhibition matches.  Jalin Rodgers (10) came away with two victories by falls, and both Andrew Bradbury (10) and Reese Montgomery (10) won matches, also by falls.

“Our boys wrestled really tough against a VERY tough St. Clair team,” said head coach Thomas McFarland.  “We reversed a few matches we lost against St. Clair from earlier in the year which is always good for morale and shows that we are improving as a team.”

McFarland also mentioned the seniors who wrestled for the final time in their home gym.  “Our seniors performed really well on Senior Night,” he noted.  “Out of our seven seniors that wrestled, they all had a recorded win for the night and only gave up a total of three losses for a combined 16 points between the two matches.  I was really proud of the whole team, but the seniors in particular kicked it up a notch.”

Festus has a final prep before the district tournament as the team participates in the University City Tournament Saturday.  The tournament starts at 8:30 a.m. 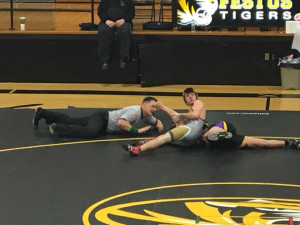 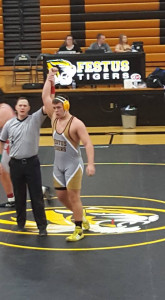 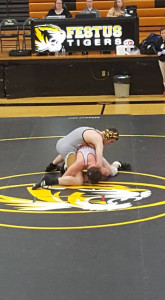