Justin Harris (12) and Tyler Sexton (12) qualified Saturday for the state wrestling meet to be held in Columbia February 16-18.

Both Harris and Sexton finished fourth in their weight classes.  Both wrestlers finished 3-2 for the district tournament held at Farmington.  Harris wrestled in the 152 weight class, while Sexton wrestled at 195.

Two other wrestlers fell just short of qualifying for state.  Both Dillon French (9) at 106 and Eli Allison (12) at 170 lost in the consolation semifinals. 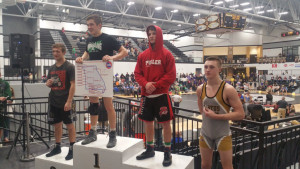