The Lady Tigers fell to Grandview at the Jefferson County Shootout Saturday night at JeffCo by a score of 60-42.

The lady Tigers Basketball Team evened their record at 1 – 1 with a 50-31 victory over Northwest. Senior Abby Rickermann led the attack with 20 points, 6 rebounds and 5 steals. 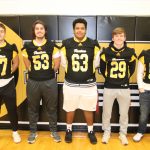