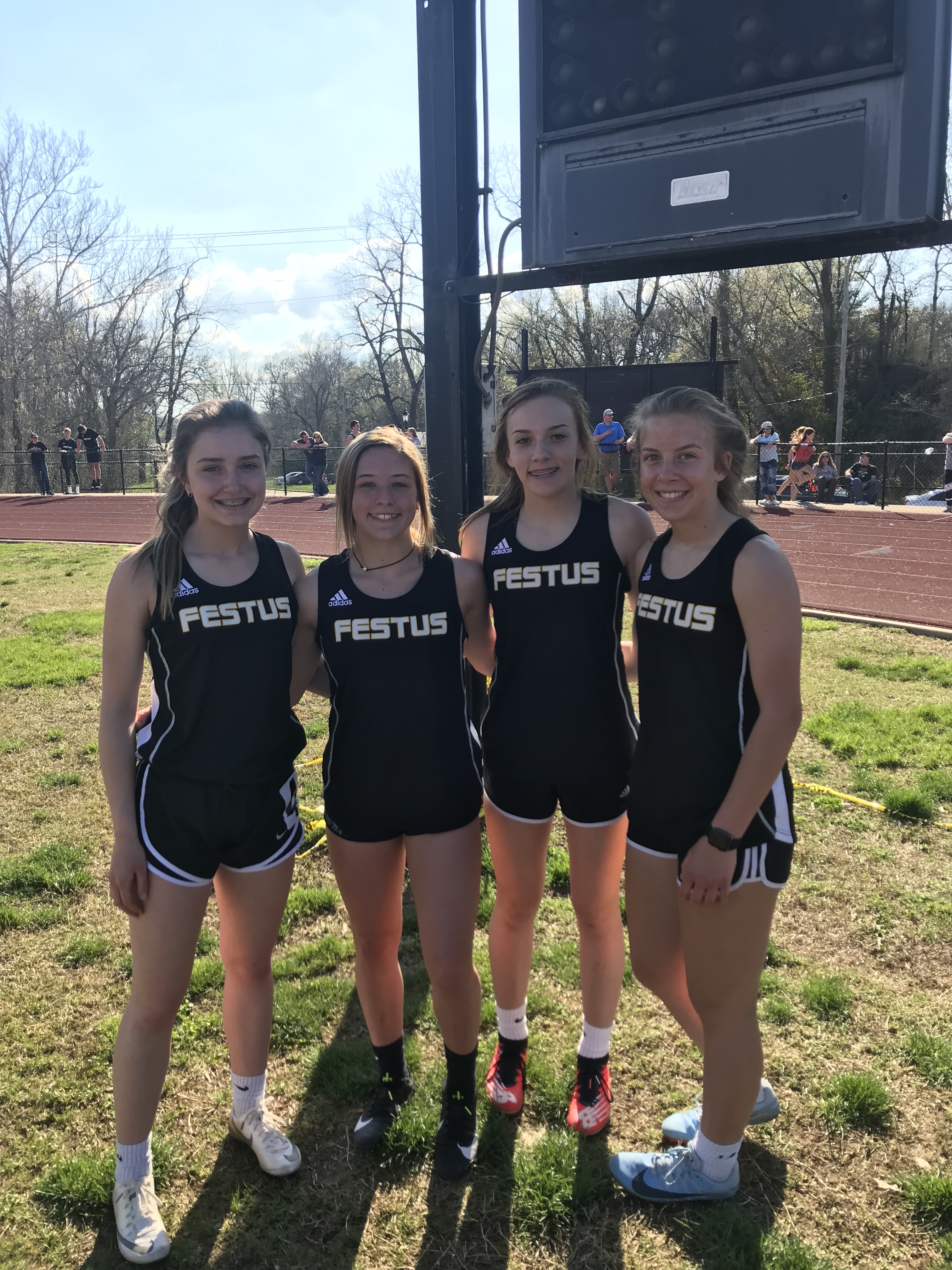 It was an exciting evening for the FMS girls track team at the Senn Thomas Relays last night. The girls finished in first place overall with a total of 85 points, nearly 20 points ahead of the second place finisher Senn Thomas (Herky) at 65.5. The girls were also successful in accomplishing the goal they set out for; to break records. New records were set in the girls Shuttle Hurdle Relay and the Distance Medley Relay. The Shuttle Hurdle Relay team consisted of eighth graders Ella Shy, Lauren Mills, Alexis Biehle and Josie Allen. The girls set a new school record with a time of 1:05.66. Hurdle coach Nichole Townsend says, “The girls were amazing last night. I don’t usually get super excited and jump and yell, but those girls were all so excited and they had me jumping and screaming right along with them! I was really excited for them.”
Eighth grade girls Kaylea Holmes, Taylor Thompson, Isabelle Douglas and Dari White made up the Distance Medley Relay team, who set a new record of 9:32.14. Head girls coach Kim Green says, “These girls went into the race determined. We knew it was going to be close and were all watching the clock. They all worked hard and it paid off.”
In other areas of the meet, the FMS girls also competed well finishing up in top spots in the vault, long jump and throws. In the Pole Vault, Coach Billy Reece reported that, “Tonight was another exciting night in the pole vault. The girls kicked off the meet and all performed well. With this being a “relay meet” we had three girls vaulting and their heights added together for their final score. The Festus Girl Vaulters did not disappoint and won the meet with a 1st place finish with a height of 20’!
Coach Trudy Scott says, “The girls had such a strong night in throws. Claire Martin PR’d in both Shot Put and Discus tonight. It was her first time ever throwing Discus in a meet and she threw 75’7”. I look forward to seeing how much she will continue to grow in this event. Kasey McDowell also had a huge night. You could literally see the sweat and tears come out. She reached a new PR of 31’9” in Shot Put. The girls throwing teams placed 4th in Discus and 1st in Shot Put. It was such a great finish for the girls. ”
Coach Green said, “The night ended with the 4×400, which is always a great race and many peoples favorite. While the girls came in second place, I couldn’t be more proud of them! It was a race that had me on my toes, as the girls fought to grab ahold of and maintain the front spot. In a nail biting finish, we came in second, but it was not for a lack of effort on Alexis Biehle’s part because she gave 110 percent!” Coach Krysl says, “I knew Biehle was tough, but I didn’t know just how tough until I saw her run the anchor of the 4X400. Sometimes, you just are amazed by how gritty certain kids are and last night was one of those nights. If you asked Alexis, she would tell you she let her team down, but that is not true. She ran Herky’s distance star into the ground in that anchor leg and only lost that race by 10 meters because her opponent had distance gas still left in the tank. That Herky girl isn’t used to being pushed like that and when Biehle passed her at the 100m mark, she had fear in her eyes that hadn’t been there before. People are going to be talking about Alexis Biehle for the next four track seasons!”
The FMS girls will lace up their spikes again next Monday when they travel to Potosi.